Masculine, generous, passionate; all underlining qualities of the actor Gerard Butler that are balanced with feminine sensibilities in the design of his post-apocalyptic New York loft home. From the 12-foot-tall enormous doors and raw, provocatively textured walls, to the delicate gold leaf chandeliers and romantic textiles, everything has a complete balance. But “none of it made sense to the typical interior designer,” says production designer Elvis Restaino, as he asks me to hold for a moment while he discusses prints and architectural design with a colleague.

With a background in designing and building commercial sets for television shows, movies, and restaurants, Restaino brought Butler’s fantasy to life in his very first residential project. Restaino spent four years planning and working with Butler to create a personalized home design that represented the actor in every way. Restaino and Butler met at unusual places to gain inspiration and ideas. They walked through architectural buildings, studied walls on streets, stepped through salvaged yards, and dug through remnants of past dilapidated objects that could be resurrected; all to depict the masculinity and ruggedness of Butler. As a creator of fantasy and illusion, Restaino translates a human’s heart and personality into design as he will “take someone, suck them out of their world and take them to a place where they are transformed and get to be whoever they want to be.” He sticks to his philosophy of a design based theory through entertainment, where he creates, “this secret life” that once it is illuminated, you’ll be changed forever. And that’s exactly what he did with Butler’s home.

The design of Butler’s loft recycles the past through a soft European-bohemian style, with a bold hyper connectivity of passionate, feminine architectural features. In fact, Restaino chose to balance two completely opposite styles because “as raw as it is, there’s these claimed feminine qualities that are always in the shadow of the rustic features,” such as the chandeliers. 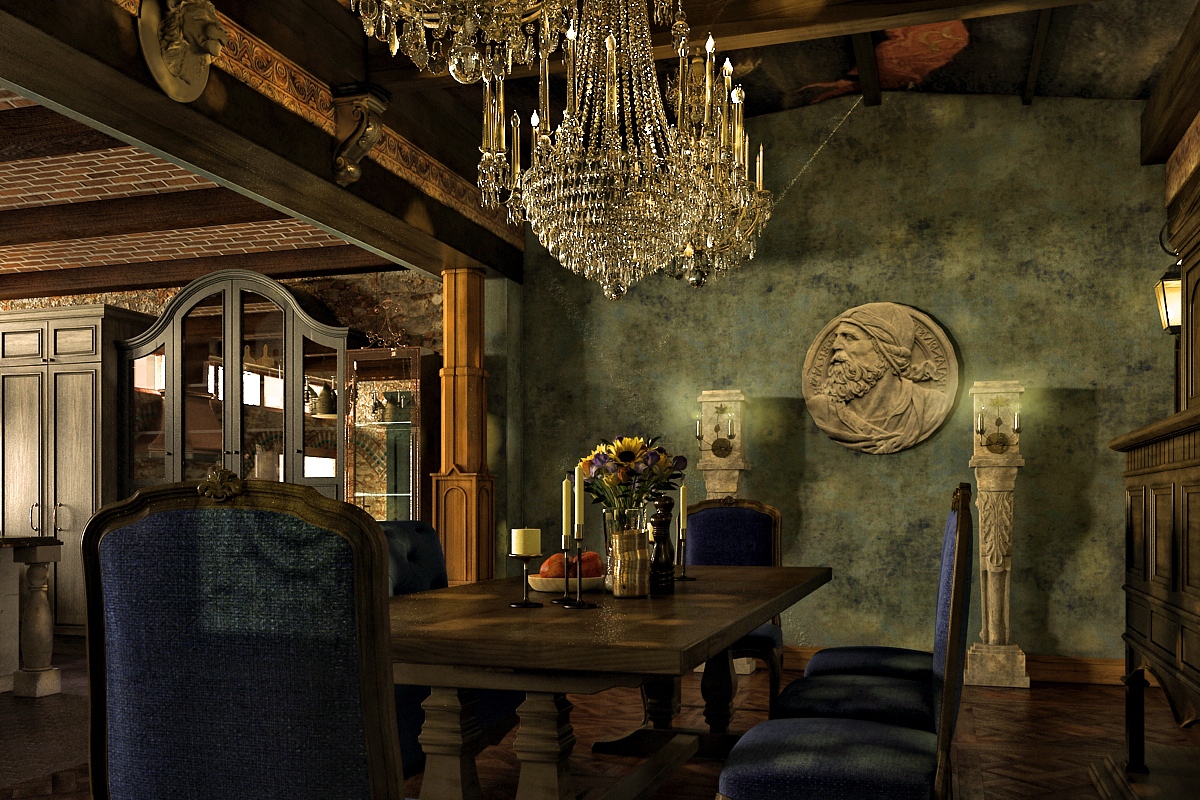 The cascading chandeliers over the dining table are a feature not to be overlooked. Restaino had them hanged in their original state; they were not measured, leveled or disturbed. They were as Restaino says, “organically picked from the universe.” Once the two components of feminine delicacy and erratic placement merged, Restaino knew he had disrupted the norm of interior designer ways. Being the featured focal point of the loft, Restaino described the chandeliers with such passion, as these, “heavy rounded creatures, which represented who Gerry is, very masculine and grounded, those chandeliers represented who he was in his creative mind.”

Choosing to recycle and recreate rather than purchase new, Restaino painted a large mural covered with Plexiglas for the ceiling. To create the vintage feeling, he painted the mural on canvas, aged the glass to look like dirty glass tile pieces, and held it all together by custom made tiny glass stars. Everything is tinted, textured, and worn down layer by layer. The entire place was previously a white gallery compartmentalized for a family that Restaino and architect Alexander Gorlin completely gutted. The walls are dynamic, containing layers and layers of colored plaster. Their personalities are brought out through the texture, as if they are organically growing. The massive ceiling beams are painted a faux wood grain, and the columns are composed of wood and chicken wire. Restaino made a point to refurbish everything by scavenging for “graveyard” items and giving them an extra lift to create the ultimate personalized design.

Butler’s loft goes beyond the typical New York home. It’s “a fascinating journey that you wouldn’t even imagine,” Restaino says. “If I blindfolded you and set you in the center of the apartment you would know it’s his place without ever knowing him, because of the design.” While the actor is constantly on the move filming his latest action thriller film London Has Fallen or serving as the face of Hugo Boss fragrance, his old-world, rustic Manhattan home will be waiting for the king to return.