The main part of the loft is organized into a dining area featuring an immense medieval-style wood-and-iron table; a cozy living area centered around the brick-framed windows; a kitchen with an excavated-looking backsplash composed of leftover floor tiles; and a templelike home theater. The theater, where Butler screens “dramas, thrillers or one of the more interesting action movies,” is the centerpiece of the apartment, its state-of-the-art screen framed by a proscenium fashioned out of a pair of Indian columns, a wooden arch support from a cathedral in the Bronx and a stone lion’s head from an old library. “I was going to put in those deep red theater curtains and have them wrap all the way around,” Butler reveals, “but I decided not to go quite that far.”

The actor, who’s on the road much of the time—most recently promoting his romantic comedy The Bounty Hunter and the DreamWorks film How to Train Your Dragon—also maintains a small flat in London and a Spanish-style house in the Hollywood Hills. But he repairs to New York whenever he can—and has plans to redo the loft’s second floor and adjoining roof terrace. “Whenever I open that huge door, I just think how lucky I am,” he says. “Those walls that surround you in the entrance hall and the huge chandelier right in front of you and this beautiful fresco above you—you realize you’re somewhere that’s completely original.”

Thirteen-foot-tall mahogany doors with a knocker that could summon the dead. A ceiling fresco depicting the rape of Ganymede. Plaster walls chipped and mottled with age, massive columns supporting limestone lions, crystal chandeliers casting spidery shadows…. Medieval castle? Ancestral manor house? Try a two-story loft in the heart of New York’s ultratrendy Chelsea district. The doors alone are remarkable enough to stop the most jaded Manhattanite in his tracks: Who in the world lives here? Why, King Leonidas of Sparta, who else? The place starts to make a little more sense when one considers that its owner is the actor Gerard Butler, and Gerard Butler is known for channeling such larger-than-life figures as the Spartan king, Attila the Hun, Dracula, the Phantom of the Opera and Beowulf. “I wanted something elegant and gorgeous and at the same time rather masculine and raw,” the actor declares, his Glasgow burr somehow enhancing the description. “I guess I would describe the apartment as bohemian old-world rustic château with a taste of baroque.” 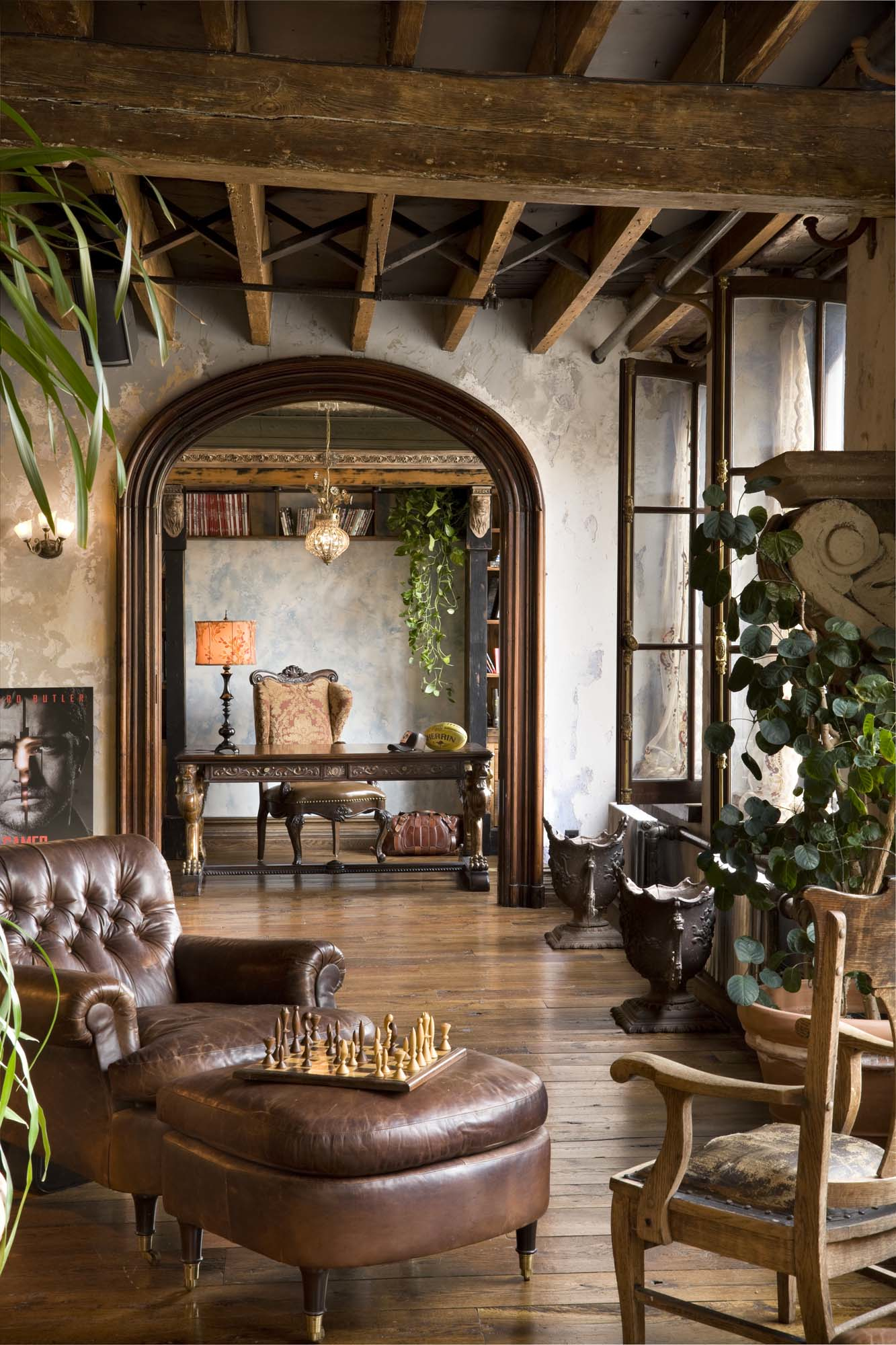 Several years ago, about the time he was impersonating Terry Sheridan in Lara Croft Tomb Raider: The Cradle of Life, Butler, who had been renting an apartment in Los Angeles, decided he was interested in more permanent digs. “I was looking at the loft and I was looking at a huge apartment in Notting Hill in London, and I knew that either one of them was going to bankrupt me. But New York is a city that fascinates me—I wanted a home in the middle of the craziness.” The loft, on the sixth and seventh floors of a converted manufacturing warehouse, boasted arched windows looking out at the Empire State Building and some 3,300 square feet of raw space—but that space had been broken up into a warren of small rooms. Butler’s realtor referred him to architect Alexander Gorlin, who gutted the place, leaving only two old support beams, then put up a single interior wall to conceal a bedroom, an office and a laundry room. “The idea was to make it an open loft in which you’d have everything visible and happening at the same time,” says Gorlin, “and then to have the private areas off to one side so we could keep the whole bank of windows open.”

The actor interviewed a number of interior designers but was underwhelmed by their “very typical, unexciting” ideas.

Then a close friend, a makeup artist, introduced him to a freewheeling, cowboy boot-wearing production designer by the name of Elvis Restaino. With Butler’s penchant for old crumbling walls as a jumping-off point, the two developed the apartment’s fanciful aesthetic over time—four years, to be exact. Restaino calls the look “modern vintage, because it combines old architectural features with modern movie-type construction.” Meaning that sandwiched inside those towering entrance portals are fire-rated metal doors. The ceiling mural was painted on movie-poster paper covered in plexiglass. The ancient-looking walls combine layers of expertly tinted and textured plaster. And the apparently timeworn columns are made of chicken wire and wood.

With Butler’s penchant for old crumbling walls as a jumping-off point, the two developed the apartment’s fanciful aesthetic over time.