Mrs. Fish, LA’s new rock n’ roll supper club, flaunts a unique style that emits a permanent cool vibe. The kind of place to keep your sunglasses on well after dark. Looking around at the floor length tapestry drapes, punchy color combinations, unusual shapes, and a 50,000 aquarium / chandelier (seriously, it’s both), one would no doubt struggle to put a name to the design style, an anomaly that architectural designer Elvis Restaino views as a success.

Understanding the history of the art movement Elvis identifies with annexes a layer of brilliance to the over all design of Mrs. Fish.

The original Dada art movement was in response to the horrors perpetuated by the First World War. The atrocities of this war undermined belief in humanity and society as a whole, including the established ideals regarding fine art. Dadaism’s objective was to devalue what was presently considered art and replace such with ironic displays using found objects. Rejecting aesthetics, Dadaists used art as a conduit for their emotions, thus their pieces became non-sensical and satirical.  Hugo Ball is the face of the beginning of the movement in Zurich, with his Cabaret Voltaire magazine and live performances. Ball also termed the style “Dada”. Artists such as Hans Erp, Marcel Duchamp, Francis Picabia, and Kurt Schwitters styled their work within the veins of Dadaism.

Just over twenty years later, the impetus of Dadaism was superseded with more barbaric forms employed in World War II. The ideals Dadaism were re-invented for the modern times. Irony and found objects once again became the focus over aesthetics; the style could even be called anti-aesthetic. Additionally, Neo-Dadaist aspired to remove the boundary between art and life, the birth of Pop Art. Elvis is a fan of the how the style irreverently threw out aesthetics.

The individual objects do not, from a traditional design perspective, “go together”, yet somehow they look undeniably cool. 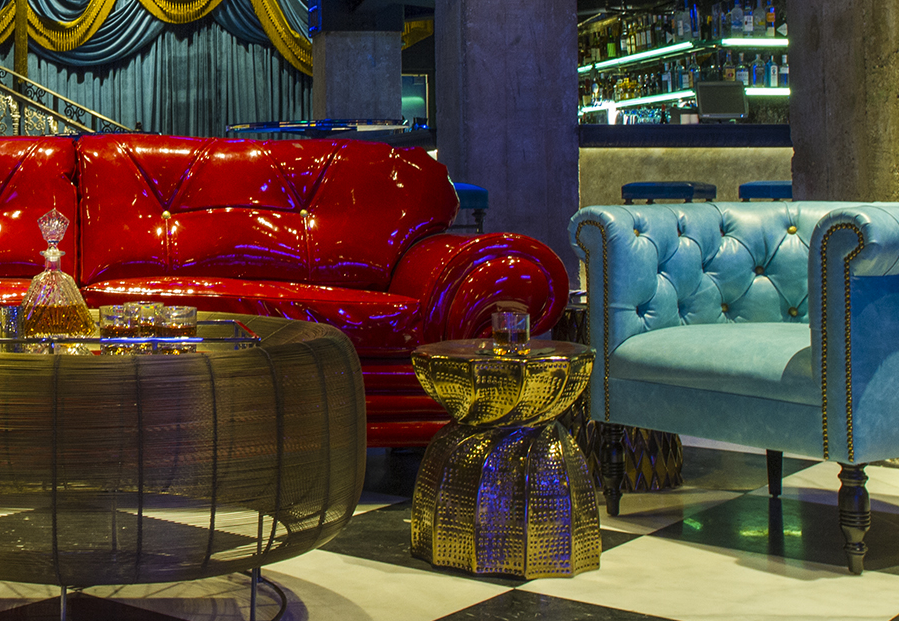 Such as the tomato red leather sofa, reminiscent of a cartoon parlor, paired with traditional elements of bolstering and tassels. When all the elements combine, the effect is glitz with a razor sharp edge…“Glam rock,” Elvis says. The influence of Neo-Dadaism reaches beyond the visible features of the design to what emotional aura the room solicits. Neo-Dadaist believed it foolish to tell how art should make another person feel, what the art was supposed to mean. “The artist designs, but the people interpret,” Elvis explains. The artist holds no domain over what reaction its viewer may have and cannot dictate its interpretation. Herein lies the beauty. The work obviously carries a message, but such is unique to the reader. When creating the mood for a club that is built on the premise of using musical art of rock n’ roll as a means of protest, expression and individual interpretation, Elvis’ unique exhibition of Neo-Dadaism was consummate design.

In contrast to many designers who would approach the theme directly, i.e. displaying Beatles records on walls, or black leather and rivets a la James Dean, Elvis chose the unmapped route of a multi-layered representation of what rock n’ roll really means. Subtle nods to the musical inspiration of the club is found throughout, such as the custom concrete tile design of the restrooms. Look carefully at the shape and record aficionados will recognize that it is cleverly patterned after an adapter that allowed 45s to be played on a full-size turntable.

Overall, the design is irreverent, audacious, riddled with symbolism yet open to interpretation. Is that not the essence of rock n’ roll? Well played, Mr. Restaino. Well played.